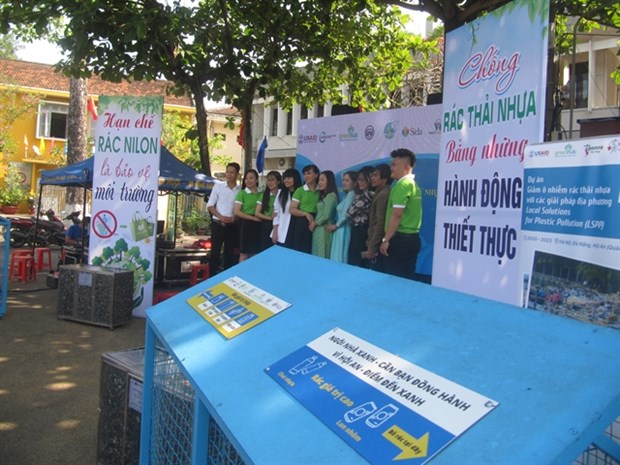 Hoi An (VNS/VNA) – The International Union for Conservation of Nature (IUCN), the centre for Supporting Green Development and PRO Vietnam have donated 54 ‘green houses’ (dust bins made from reform plastic) and waste classification tools to Hoi An City’s Women’s Union to boost recycling and zero plastic waste in the community.

The dust bins, which were recycled from plastic bags, single-use straws, styrofoam and low-value plastic waste, will be used to collect the single-use plastic and low-value waste for reform into useable tools, panels and furniture in Hoi An.

It also helps improve awareness in reducing plastic waste while promoting recycling among the community and tourists.

In Hoi An, a tourism hub in central Vietnam, 30 percent of daily collected waste (about 110 tonnes) is low-value plastic waste (single-use cups and straws, styrofoam, milk box and food packages).

Tourist trading activities accounted for 40 per cent of daily waste in Hoi An.

Evergreen Labs set up the reform plastic factory to classify and recycle 1,000 tonnes of low-value plastic waste in Hoi An.

The Cham islands, 20km off the coast of Hoi An, have officially banned plastic single-use straws and cups and plastic bags.

About 100 businesses in Hoi An committed to reducing 30 percent single-use plastic and recycling 50 per cent of organic waste.

Tan Thanh weekend flea market on An Bang beach, 5km from Hoi An, has been building ‘green’ beach tourism by boosting plastic-free and zero-waste recycling among the community and tourists.

Cham islands and Cam Thanh commune, two favoured destinations in Hoi An, have been building as the first ‘zero waste’ sites in central Vietnam./.